“It’s a warm, humid Wednesday afternoon in February. Nick and I are in a dense forest, part of a nature park in Florida. While we discuss the next steps of our business, I take in the countless shades of green and exotic palm trees surrounding us. Mere minutes ago, we ran into an alligator – which symbolises the life I’m currently leading: no day is ever the same. Even business meetings look nothing like the way they did before.”

“The seed was planted in Brazil when I was 18. Three years earlier, my parents had started hosting students via AFS, an international exchange organisation. I lived in a small town and hadn’t travelled much, but connecting with those young internationally-minded people made me ponder about going abroad myself. After high school, I signed up for my own AFS experience and landed in Brazil. Moving there felt like the start of a new life. My 10 months in Paraná were proof that I could start over: I discovered a new culture, built a new network, and learned a new language that I now speak fluently. Ever since, I’ve wanted to explore as many places as possible, as often as I can.

The international connection was an aspect I pursued in my professional life as well. By the time 2019 rolled around, I was working for a Japanese company in Belgium. I wanted to grow into a leadership role, but I was stuck in a junior position. I knew that if I stayed, it would take a long time before I could take the next step in my career. I tried my luck and applied for a grant from the Prince Albert Fund, a non-profit that supports young professionals to manage a 12-month business project outside Europe for a Belgian company. Much to my joy and a bit of surprise, I got accepted. 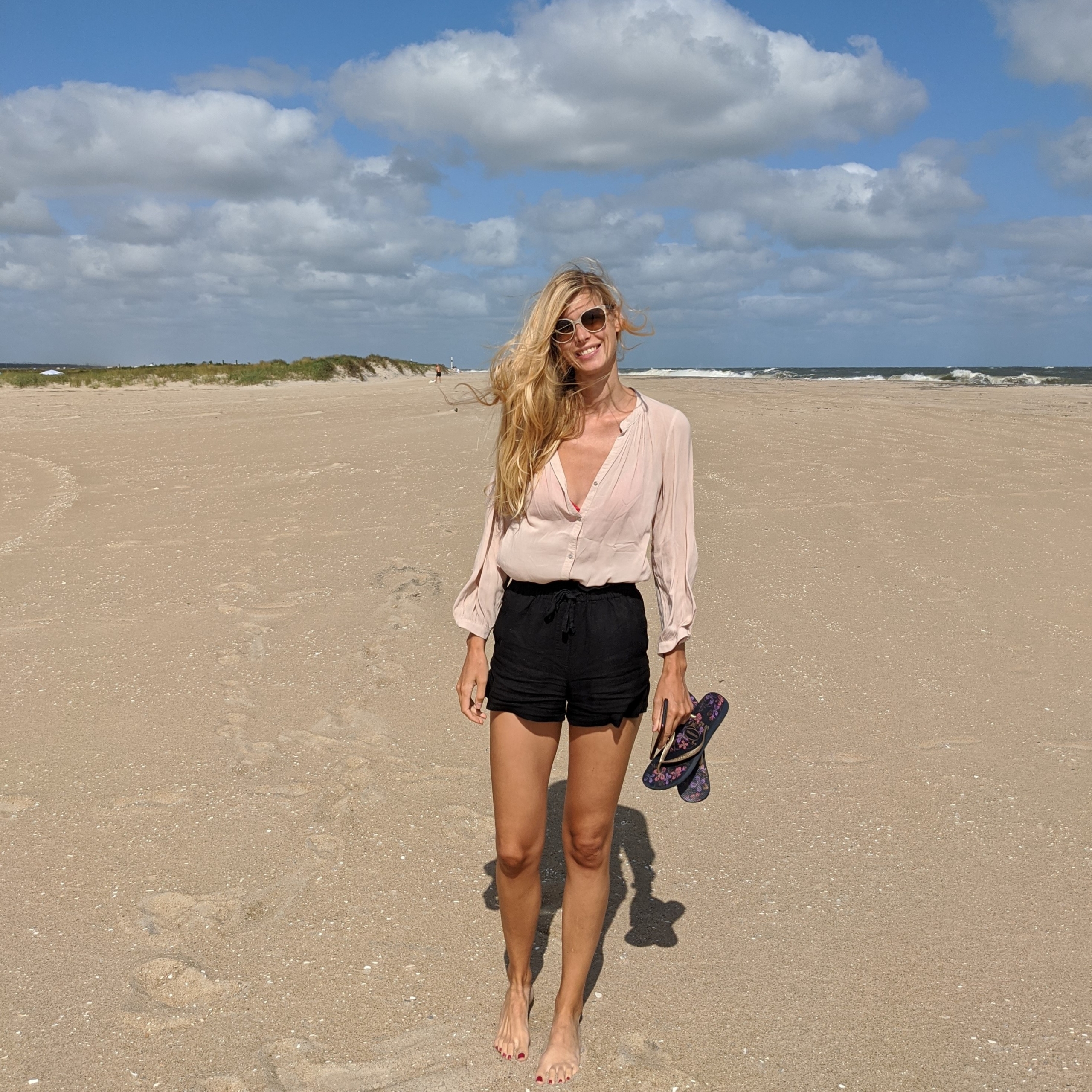 New York calling
While searching for a suitable project, I had my mind set on a continent I wasn’t familiar with yet, preferably Africa or Asia. But my main priority was to take up a business development role in a company that I was interested in. I eventually landed a project that matched my wish list perfectly, for a Belgian plus-size clothing brand. The destination wasn’t plan A or B, but early November, I boarded a plane to New York City. I had no idea if city life would be my cup of tea, but it took me less than a month to feel settled. I enjoyed the hustle and bustle of the city that never sleeps: at 5 PM, I had no plans for the evening – by 6 PM, I had three.

I appreciated the freedom and flexibility that came with my project. I was the only employee in the US and my job was result-focused, so I could organise my own schedule. Especially in the beginning, I networked often: I searched for information on how to set up a company in the US and met with professionals from the retail industry. I toured the entire city for appointments. Sitting in fancy meeting rooms in massive skyscrapers overlooking the skyline, it hit me again and again: ‘How lucky am I that this is part of my job.’ 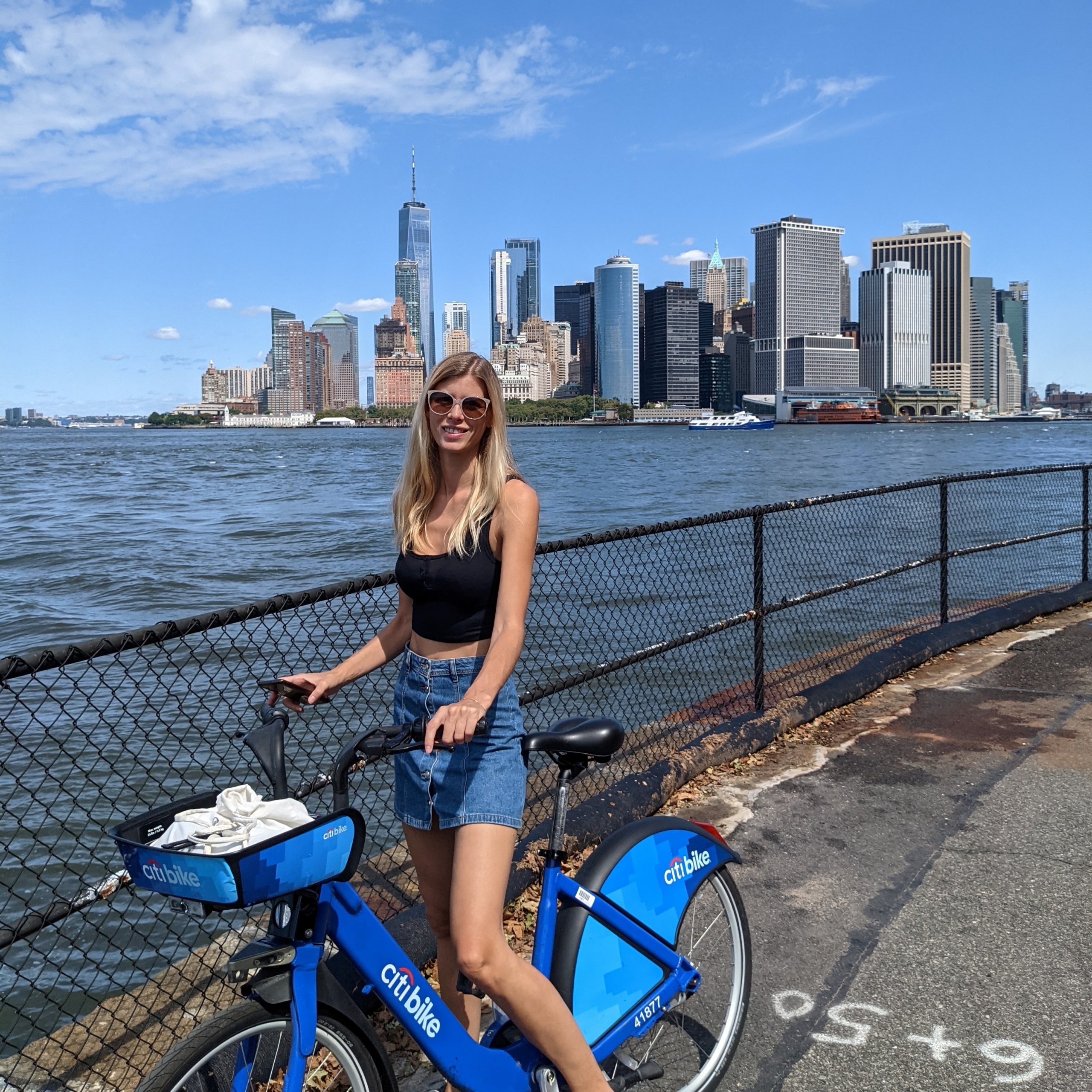 Connections
Aside from being focused on my career, I was keen on expanding my personal network. I wanted to connect with local people, but I wasn’t necessarily looking for a man. Then I met Nicholas. We got together on a cold Sunday in winter and hit it off immediately. It felt so easy to talk to him – and as we did, we found we had quite a bit in common. He had also moved abroad when he was 18 and lived in Europe for a few years. We quickly met again and before I knew it, we saw each other every day, for a concert, a dinner, or a workday at a coffee shop.

We totally went against the typical American dating culture. The unwritten rule says you should date casually for quite a long time, until the guy officially tells you he’s ready to stop seeing other people and be in a steady relationship with you. On our fourth date, Nick and I addressed our intentions, which directed the course of our relationship. He said he was looking for something serious – which was no lie: after two weeks of dating, he invited me to join him and his friends on a ski trip. Three months in, we went to see his family, which is a major event in the US. Finding a partner hadn’t been on my list when I first moved, but since we were such a good match, I went all in.

Twists & turns
In March 2020, when the pandemic took over the world, retail was one of the first industries that got hit hard. After four months of intense work, we were about to buy in our first collection for the US. From one day to the next, everything was put on hold. The international press was extremely negative about New York, with the city being heavily impacted by the virus. The company I worked for urged me to return to Belgium. The dream of setting up an office, taking up a manager role and living in the US long term – it all fell to pieces.

Returning at a later stage would be much more complicated; the visa process is arduous without any guarantee you’ll eventually get one. Nick and I wanted to continue exploring our relationship, so neither of us were willing to spend much time apart. When we first started dating, a few friends had joked he was my ticket to a Green Card. I never mentioned it to him, but one day, out of the blue, he asked me what I thought of the idea of marriage. It would buy us time and allow me to apply for a permit that wasn’t related to an employer. While we primarily saw it as a practical solution, I knew that Nick was the man I wanted to spend my life with. 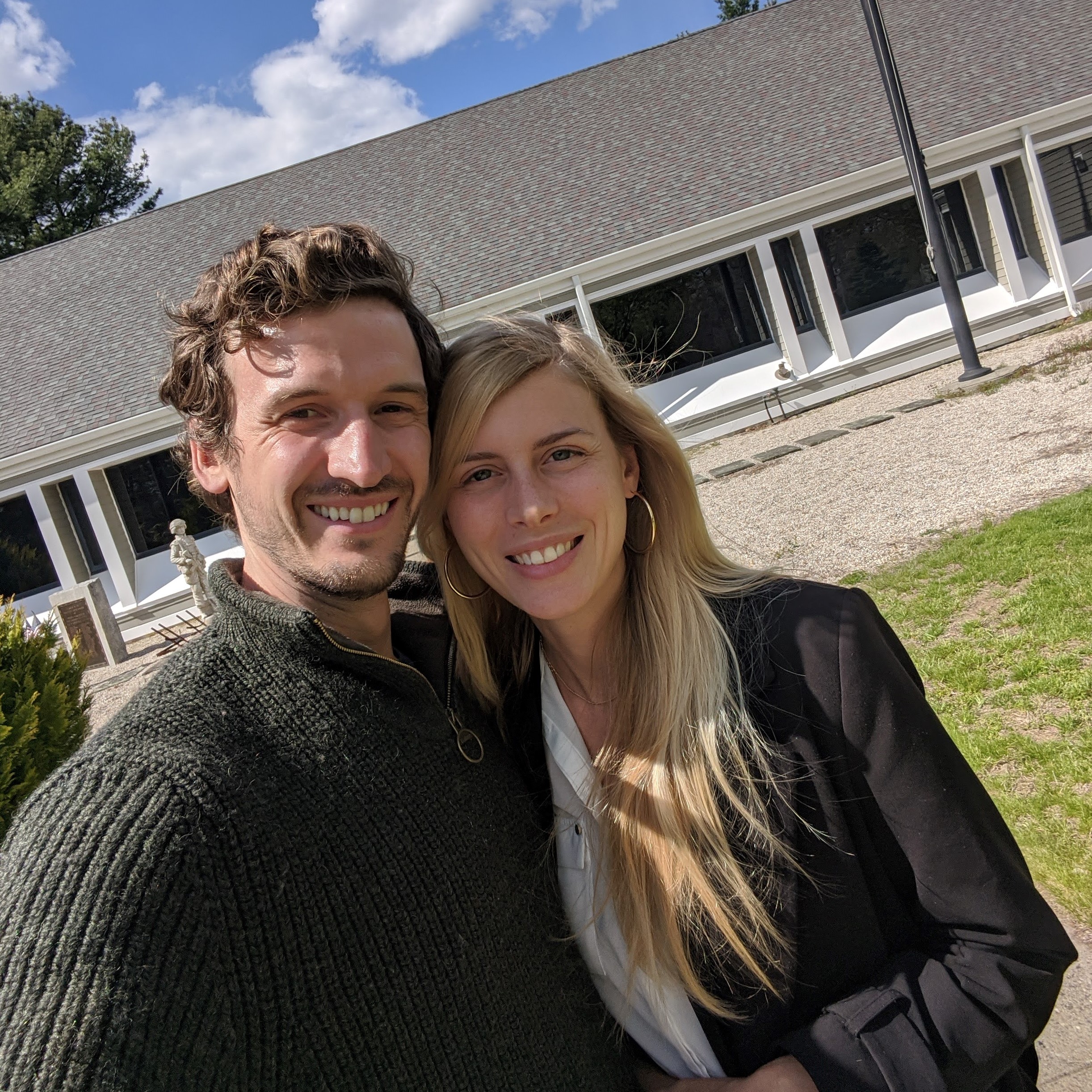 Wedding bells
On a Thursday afternoon in early spring, we drove to the city hall of the tiny town of Seekonk, Massachusetts – one of the few that was open in the midst of the pandemic. Dressed in jeans and sneakers, I looked into the eyes of the man who, 5 months before, was a stranger to me. The day itself was void of romance – we stopped by the supermarket for groceries after saying ‘I do’. I have no regrets, because it suited me: I’ve never wanted an elaborate ceremony or giant party. If you had told me 10 years ago that my wedding would look like this, I wouldn’t have been surprised. Granted, it was a day like any other, but it did mark our feelings towards one another: we wanted to be and stay together.

By the time we got married, we were living with Nick’ parents to spend some time away from the city. The end of my visa was coming up in June, and Nick had sublet his apartment to come to Europe with me. The idea was to return to the US together in the fall. At the last minute, my project and visa were extended due to the COVID-19 situation. We changed our plans drastically: within a week, we had bought a car and decided to spend a week in one place before moving on to the next. 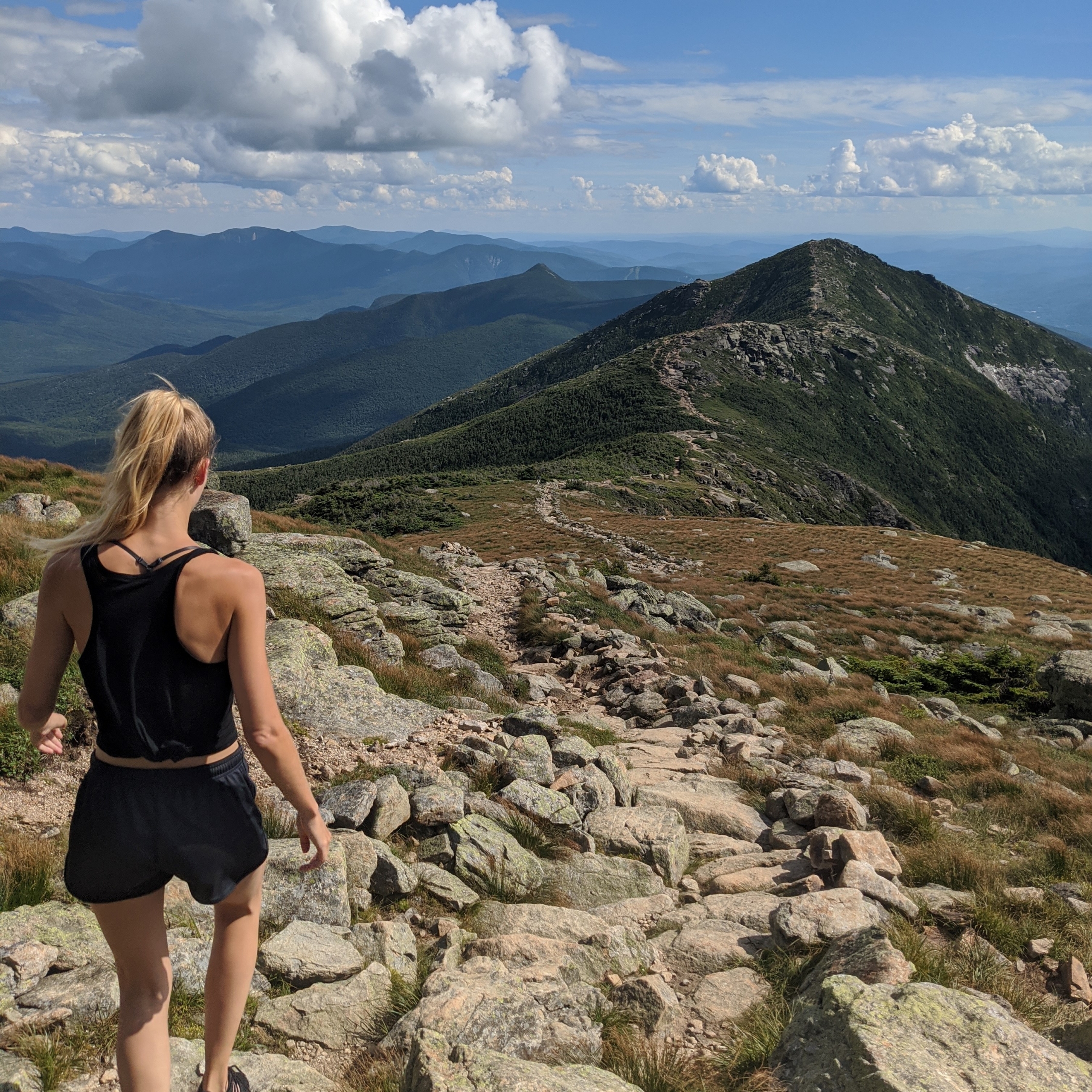 On the road
We’ve been doing it ever since – and I wouldn’t want it any other way. I love being able to discover new places and live and work together with Nick. Once my Prince Albert Fund project ended, I started freelancing for his company – he was in the process of founding his own agency, a challenge that was in line with the skills I wanted to build. We drive a maximum of 4 hours every week and book Airbnbs that are located along our route. When we first hit the road, it wasn’t our goal to pass through all US states, but now that we’ve crossed the 24 eastern ones off our list, I’m looking forward to visiting the other half. The best part of this lifestyle is the fact I can travel while working a full-time job. Before, I could plan one or two large trips a year, but now I have the freedom and flexibility to travel whenever and wherever I like. I used to believe life just happened, but now I realise it comes down to making the most of the opportunities that come along.

If anyone asks how long we’ll keep up this lifestyle, I say for as long as possible. Nick and I don’t have a long-term plan. For the past year and a half, our plans have been dictated by the Green Card process. Since I couldn’t stay in the US for a continuous period of time, we spent a few months in Mexico in the summer and headed to Europe in the fall. Even once the process is completed, we want to continue exploring different countries. I get nothing but positive reactions from friends, who’re excited for me that I get to travel around even in such strange times. Our families do sometimes ask when we’re planning to settle down, although they’ve become used to us not being around. Once we have children, which both of us want, we might have to reconsider our lifestyle. But for now, we’re really happy with where we are – in life and in love.”

Chloe left Spain to rebuild her life in China: “I’m ready to return...

Alicia struggled with the emotions of a young mother, but consumed every bit...
Scroll to top

We may request cookies to be set on your device. We use cookies to let us know when you visit our websites, how you interact with us, to enrich your user experience, and to customize your relationship with our website.

Click on the different category headings to find out more. You can also change some of your preferences. Note that blocking some types of cookies may impact your experience on our websites and the services we are able to offer.

These cookies are strictly necessary to provide you with services available through our website and to use some of its features.

Because these cookies are strictly necessary to deliver the website, refuseing them will have impact how our site functions. You always can block or delete cookies by changing your browser settings and force blocking all cookies on this website. But this will always prompt you to accept/refuse cookies when revisiting our site.

We fully respect if you want to refuse cookies but to avoid asking you again and again kindly allow us to store a cookie for that. You are free to opt out any time or opt in for other cookies to get a better experience. If you refuse cookies we will remove all set cookies in our domain.

We provide you with a list of stored cookies on your computer in our domain so you can check what we stored. Due to security reasons we are not able to show or modify cookies from other domains. You can check these in your browser security settings.

We also use different external services like Google Webfonts, Google Maps, and external Video providers. Since these providers may collect personal data like your IP address we allow you to block them here. Please be aware that this might heavily reduce the functionality and appearance of our site. Changes will take effect once you reload the page.