”Almost a year in, Berlin has come to feel like home. The street scene is extremely diverse: you see women with half-bald skulls or green hair going for a run, or 50-year-old men with mohawks cruising by on their Harley Davidson bikes… Nothing is too crazy or too wild. I appreciate the freedom of possibilities that reigns here; all Berliners can be themselves. Due to the pandemic and lockdowns, I haven’t missed out on much in Belgium. I do miss my family and friends, but we call each other often – more than before. I used to believe I had to attend every event in order for my friendships to be strong. I’ve let that go: I realise it’s not the quantity, but the quality that determines how intense or deep my connections are. Nowadays I’m more focused on my priorities – the people and things that are important to me – and trust that the rest follows in due course.”

“I’ve had always dreamed of a life abroad, but the thought of taking off on my own scared me. I had heard sensational stories from friends who had travelled alone – yet the risk of being stuck in a place I didn’t like, with nobody else around, held me back. But despite the fear, I did sense a longing for more after a number of trips in- and outside of Europe. I once went on a safari to Zambia – I remember this magical sight of elephants strutting by as I showered outside behind our lodge. Or there was the time I explored Panama with a high school friend I hadn’t seen in 10 years. Our arduous midnight hike to the Barú volcano stands out the most: when we arrived above the clouds after the 5 longest hours of my life, every cell of my body shivered as we waited in the freezing cold for a picture-perfect sunrise. But if I have to pinpoint the moment my dream intensified, I’d say it was during my month-long stay in Morocco. At the time, I had reached the 5-year mark of my recruitment job at an IT consultancy firm, but tiredness had kicked in. I can’t really put my finger on it, but I intuitively knew Morocco would be the start of change. 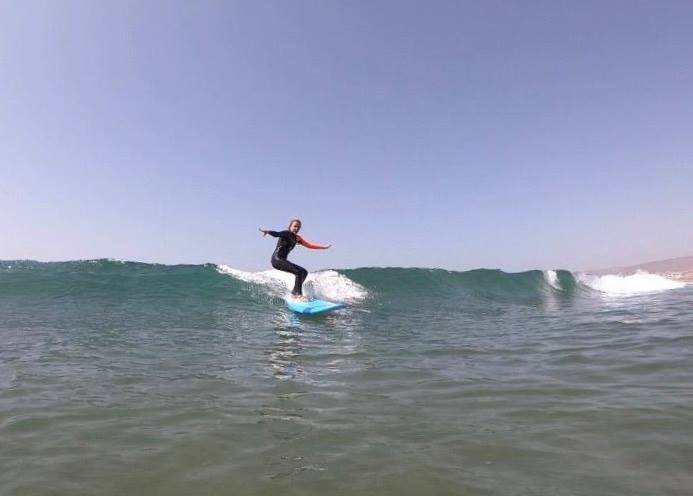 Finding a prince in Königsleiten
In February of last year, right before the pandemic struck, 5 ladies of my hockey squad and I drove to Königsleiten, Austria, for a ski trip. I had been dating a guy back in Antwerp. I could sense something was off, but the mixed signals he sent confused me. In the end, the 1000 kilometers distance made it clear he wasn’t ready for anything new. I was upset, but the girls pushed me to not overthink the situation. Instead, since most of us were single, the plan was to make the most of our evenings in the après-ski bars. On one of those, a handsome German guy caught my eye. Before long, our group had approached his – and one of my friends forced me to walk up to him. I felt like my 15-year-old shy self again, but was quickly put at ease when he admitted he did too. He introduced himself as Mike, an engineer who worked at Volkswagen and lived in Berlin. We chatted a bit, laughed and danced – and hit repeat the next night. We kissed in the bar before he insisted on walking me back to the chalet like a true gentleman. But as I slid on the passenger seat for the 10-hour drive home, I thought: “I’ll probably never see him again.”

After the trip, I couldn’t shake the thought of him completely, so I caved in and looked him up online. He didn’t have Facebook, but I found him on LinkedIn – call it a quirk of the trade. We spent three months chatting before he invited me to visit him in Berlin. I didn’t have to think about it long, but I remember being super nervous – the pandemic was in full swing and I had no idea whether Mike would meet the expectations I had unwittingly built throughout months of messaging back and forth. He eventually met me halfway in Hannover and took over my car so I didn’t have to drive the full 8 hours straight. He had packed a homemade picnic – yoghurt with strawberries – which turned out to be the first of many pleasant surprises. We toured the hidden corners of Berlin, laughed non-stop and closed off the weekend watching the sunset under a blanket by the Spree river. While I felt a bit overwhelmed and needed to let things sink in, Mike went all in. Not that I stayed behind: by the time we saw each other in Düsseldorf the week after, we dropped the official term ‘relationship’. The next months, we spent all of our days off taking turns travelling to Belgium and Germany and vacationing together in Portugal.

Packing my bags
In August, my contract as a freelance recruiter ended. My intention was to search for a new 1-year assignment, but then, right after a surf session one sweltering afternoon in the north of Portugal, Mike invited me to move in with him. I knew it was fast, but things between us were going unusually well. We could be ourselves for the full 100% and seemed to like everything about each other. I’d never had such intense feelings for a man, so it wasn’t a difficult decision to make. When I told my family and friends, some got very emotional – but most of the reactions were super positive. The hockey ladies who had witnessed us meeting for the first time adored our story – to say they were enthusiastic is an understatement. I combined my birthday gathering with a going away party on September 17th. The day after, we packed and loaded my possessions into a moving van and drove to Berlin in one go. I had carried eleven boxes up the stairs and sat on the couch next to Mike, curled up against him, when I realised my dream had come true: I now lived abroad, but I had someone by my side to share the experience with. 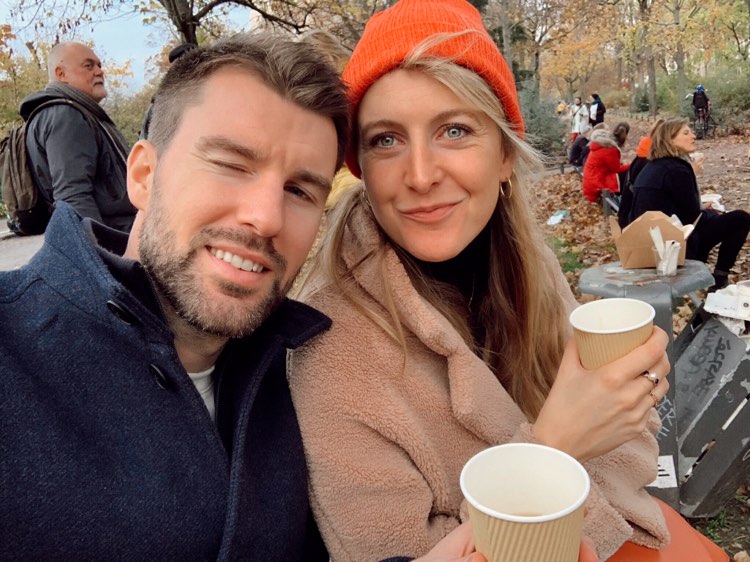 The first few months, I gave myself time to adapt. I hadn’t expected it, but when the cold, dark winter days rolled around and bars and restaurants closed down due to COVID-19, the adjustment process got a bit harder. I wasn’t bored though – I kept myself busy with a revamp of Mike’s apartment and intense German courses. It was important for me to be able to communicate with his family and friends. Although I still make mistakes, I speak German much more fluently now – it’s the only language Mike and I use. I decided not to return to my job as a recruiter; that career path is a closed chapter for me. I couldn’t picture myself working for a boss, so I knew I wanted to remain self-employed. Mike gave me the time and opportunity to explore my options. My search was guided by one thought: life is too short to be doing jobs you dislike. Since friends had often advised me to put my creative skills to good use and I had got so much energy from redecorating Mike’s apartment, I took interior design as a starting point.

Exploring a new path
I landed at an upcycling project, which includes the design and creation of lamps and lampshades. I’m currently in the preparation phase, because German bureaucracy made me wait three months for my company registration number. I’m a proud self-taught lampshade maker: due to the lockdown, face-to-face workshops were suspended, which resulted in me wading through countless YouTube tutorials. The creation process is much more complicated than it seems. The YouTube videos taught me the basics, but I couldn’t find info on the details, like the type of drill I should use, or the correct German translation for the silicone tube I needed. It’s been an ongoing process of research and practice. I invest so much time and effort, because I want my lampshades to be perfect once I start selling them. I’m not completely sure of where I want to end up, but I am convinced of my new direction. I’m determined to make this project into a success. Also for Mike: I want him to be proud of me and see what I’m capable of. And who knows… Maybe one day it turns out these lampshades were the start of my own interior design empire.

Trusting the process
Ten years ago, I couldn’t have predicted I’d end up here, although I’ve gone through such an evolution since then. Experiences in my twenties were never as intense as they are now. I think it has to do with better understanding who I am and where I want to go. I believe that once you know, you start attracting those things. After Morocco, I became self-employed, met the love of my life, moved to Berlin… I’m happy with the choices I’ve made so far. And there’s more to come: in September, we’ll head off to South Africa for three months, as Mike takes on a new assignment there. I might have to delay the launch of my company, but unpacking my bags in Summerstrand, a place by the water in Port Elizabeth, doesn’t sound like torture either. In any case, our next step won’t be boring. Eventually, we’d like to move to Düsseldorf, closer to nature and both of our families, but for now, I’m going with the flow. In my experience, when you make plans, you’re often pushed into a different direction – one that might be better than what you had in mind.” 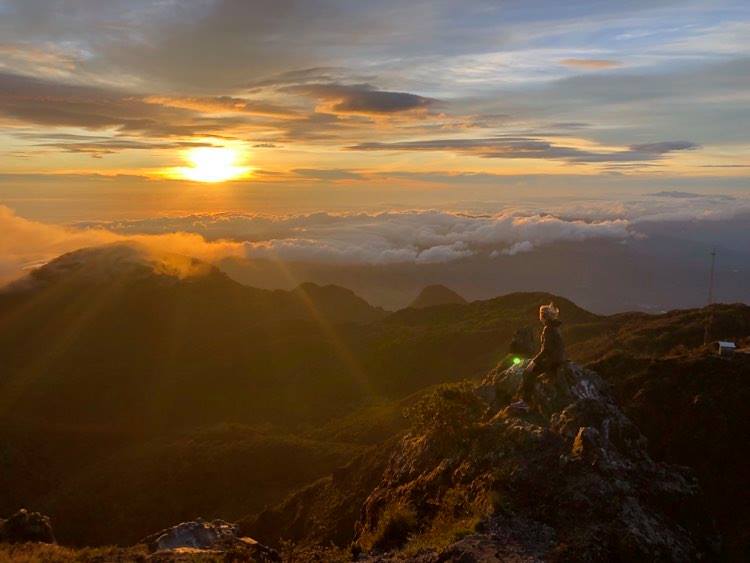 Marie got married and divorced within a year: “It’s a mark of shame I continue...

Magalie found her cause when her son arrived: “I want to make an impact by...
Scroll to top

We may request cookies to be set on your device. We use cookies to let us know when you visit our websites, how you interact with us, to enrich your user experience, and to customize your relationship with our website.

Click on the different category headings to find out more. You can also change some of your preferences. Note that blocking some types of cookies may impact your experience on our websites and the services we are able to offer.

These cookies are strictly necessary to provide you with services available through our website and to use some of its features.

Because these cookies are strictly necessary to deliver the website, refuseing them will have impact how our site functions. You always can block or delete cookies by changing your browser settings and force blocking all cookies on this website. But this will always prompt you to accept/refuse cookies when revisiting our site.

We fully respect if you want to refuse cookies but to avoid asking you again and again kindly allow us to store a cookie for that. You are free to opt out any time or opt in for other cookies to get a better experience. If you refuse cookies we will remove all set cookies in our domain.

We provide you with a list of stored cookies on your computer in our domain so you can check what we stored. Due to security reasons we are not able to show or modify cookies from other domains. You can check these in your browser security settings.

We also use different external services like Google Webfonts, Google Maps, and external Video providers. Since these providers may collect personal data like your IP address we allow you to block them here. Please be aware that this might heavily reduce the functionality and appearance of our site. Changes will take effect once you reload the page.